To Veil or Not To Veil?

Ever since the corrected wording of the Mass was restored at Advent last year, the thought of wearing a veil has been in my heart.  But I agree w/ so many -- when you're unaccustomed to seeing it, the wearer can seem ostentatious.  Then I saw a woman (admittedly, older) one day wearing a black veil that was just a whisper, just barely there.  It was a traditional mantilla, shoulder-length, but the black lace was so sheer (almost like organza), with only some dainty lace edging, that my heart leapt and I thought, "Ah-ha!  There is the veil for me!"

I happened upon her in the church parking lot during the week, and explained my admiration.  "Please tell me," I smiled, "where did you get it?"  She smiled back gently.  "I made it."

My heart sank.  Selfishly, my smile faded a bit.  "Oh," I replied weakly, hoping to sound as if I thought that was lovely, but knowing instead that I sounded disappointed.

"I'd be glad to make you one!" she rushed to assure me with a delighted grin.  My hopes rose anew.

So now, we have exchanged sacramentals and I wear the veil at every Mass.

A dear friend, who recently decided to veil, noted that at her son's First Communion, the presiding priest complimented the children on how dressed up they were, and invited them to dress and comport themselves as well every time they received Jesus in the Eucharist, because it was just that special.  My veil helps me remember that importance, and now wearing it seems as natural as genuflecting.  Just as I would not wear my pajamas to Mass, my veil is a visible reminder to me that I am on holy ground, and so should garb myself appropriately. 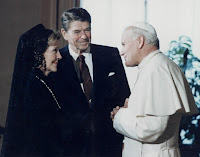 The Bible calls a woman's hair her glory, and my veil reminds me that I should humble myself in every aspect before the Lord.  Since wearing it, I must also report that at least half a dozen women have approached me cordially to inquire about it and consider it themselves.

I'm not posting this to be a veil-pusher, but just to encourage anyone else who might be considering wearing a veil for Mass and in the presence of the Blessed Sacrament.  Remember, you're not wearing it in submission to any man around you.  You're wearing it in submission to The Son of Man, The Creator Of The Universe.  How humbled we are in the presence of the Lord!

This is Claudia LeBoeuf, the one who used to be in the homeschool group but is now living in Santiago Chile. I wanted to add to your 'reasons to veil'. My daughters and I just started to veil recently at a few Latin Masses and yesterday was the very first time we veiled at a Novus Ordo Mass. Felt very strange but we made it through and got no comments about it. Before we started veiling, I searched the web for the reasons why it was done, and in addition to the reason of humility which you mentioned, I found a discussion of more of what St. Paul said which I found very beautiful and which really gave me the courage to actually do it. It was as follows: Since Jesus was made Incarnate as a man, the men represent Jesus at the Mass (everything was in the context of the Mass, not outside it); the women represent the Church, i.e. the bride of Christ, at the Mass. Therefore, the veil represents also the purity of Christ's bride, for which we strive, and also the fact that we are protected by Christ, as is His bride the Church. This idea struck me like a fireball in the brain too hot to touch. It made me feel truly privileged to be a woman and have the role of representing the bride at the Mass and to show this by wearing the veil. As I said earlier, it really gave me the courage to wear it to Masses where I knew no one else would be wearing one.

Dear Claudia - It is so heartening to read your comments! THANK YOU so much for taking the time to read my blog posts on Veiling and responding with your experiences. The veil is so important to me now as a reminder of humility, reverence, and privilege, and you said it all so beautifully. Thanks! :-)