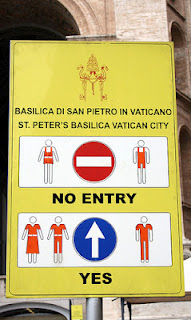 This sign was brought to my attention by a friend, who saw it on the blog, "The Canterbury Tales" (http://cantuar.blogspot.com/2012/06/dress-code-for-vatican-should-it-be.html).  It is posted outside the entrance to the Vatican -- you know, St. Peter's Basilica in Vatican City?  In Rome?  Italy?  The mother church for all Catholics?

Look.  Truly.  I'm not trying to be "unwelcoming" or "exclusive" to people who might be dressing differently for Mass, because, say, they cannot afford fancy clothes, or they are on their way to work as a ditch digger, or they are off to change bed pans for the elderly at the hospital immediately after church.  I get it that we can't all dress to the nines every Sunday, because of occasional extenuating circumstances.

But, lemme tell ya, some people haven't got the sense God gave a chicken when it comes to dressing for Mass.

If the dress code on this sign is good enough for the Vatican, then it is good enough for me.  I don't think it's excessive to ask people to cover up their general nakedness during Mass in order to eliminate what can become an intense distraction, especially to those present who are of an age with, um, raging hormones (*cough*).

Is Mass being held outside in the parking lot today?

In this instance, you really gotta hand it to the Protestants on zeal.  Have you ever SEEN the dress code for some African American Protestant churches on Sunday?  "Sunday best" would be considered dress down for these fine folks.  The men are in suits and the women are in their prettiest dresses and, often, hats, too.

Why can't we just accord Our Lord the same visual respect we would give a visiting dignitary or prospective employer?