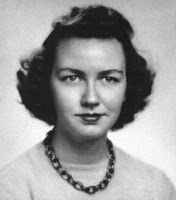 “I think that the Church is the only thing that is going to make the terrible world we are coming to endurable; the only thing that makes the Church endurable is that it is somehow the Body of Christ and that on this we are fed. It seems to be a fact that you suffer as much from the Church as for it but if you believe in the divinity of Christ, you have to cherish the world at the same time that you struggle to endure it.”  (Flannery O'Connor)


I was inspired to share this quote after speaking with someone who, unfortunately, was treated harshly by a consecrated religious person.  Remember, the Church is made up of fallible human beings, which does not negate the fact that it is the one, holy, catholic, and apostolic Church -- our Faith -- begun by Jesus Christ Himself.  It will withstand the gates of hell (remember? He promised in Matthew 16:18) and it contains the fullness of the Magisterium, not to mention the Real Presence of Jesus Christ!

Please don't let Old Scratch plant one bad seed in your life and thus spoil all the fruits of your spiritual well-being and nourishment from the Church.  Even if the person who has injured you is a consecrated cleric or religious, don't let someone else's human failings keep you from your heavenly Father or from the guidance of your spiritual father on earth, the Holy Father, Il Papa, the Pope.

Remember the goal?  To know, love, and serve Him in this world and be happy with Him forever in the next.  With HIM!  And He *IS* there in tabernacles throughout the world.  Don't let anyone drive you away from the Church and thus keep you from being in His presence and adoring Him.