A Reprieve, Thanks to St. Joseph! 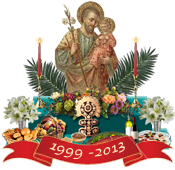 This week, we are given a reprieve from the self-deprivation of Lent by celebrating the feast of St. Joseph tomorrow on Tuesday, March 19th.  For all you Italians out there -- or just you humble daughters of the foster father of our Lord -- here are some crafty ideas for celebrating this important feast day from one of the usual suspects, Catholic Icing.

Additionally, we found a really lovely, simple, paper "St. Joseph's Altar", courtesy of Evann Duplantier, for your family to construct.  Evann also has a lovely page full of menu choices, where you may enjoy everything from inspirational photos of other St. Joseph's Day altars to a super easy (and yummy!) edible craft.

Our parish deacon reminded us last Christmas that, although St. Joseph figures prominently in Jesus's early life in the Bible, St. Joseph never says a word.  Not one syllable.  How many of us could be counted upon to hear the Lord, follow His instructions, trust in His ways, and serve Him as He wishes, without ever saying a word?

Blessed "Pope John XXIII, who succeeded Pius XII in 1958, added some new feasts and made some other changes to the liturgical calendar, as well as amending some of the rubrics. In his 1962 edition of the Missal, he also deleted the word 'perfidis' (Latin: 'faithless') from the Good Friday prayer for the Jews, and added the name of St. Joseph to the Canon of the Mass. The second change was particularly significant, as many had considered the text of the Canon to be practically untouchable." (emphasis added)

It Ad Joseph!  And enjoy!