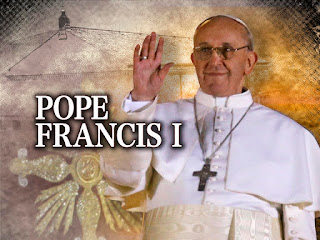 
Elected Pope - March 13, 2013
Number Pope - 266th pope in line of succession from the first pope, the apostle St. Peter
Papal Name - Pope Francis, chosen in honor of St. Francis of Assisi (not "Francis I," until there is a "Francis II")
Papal Inaugural Mass - March 19, 2013 (Feast of St. Joseph, Patron Saint of the Church)
Responsibility - Supreme Pontiff of the Catholic Church and sovereign ruler of the Vatican City State
His Firsts for a Pope - Latin American, Jesuit priest, named Francis, non-European in 1,272 years

Email ThisBlogThis!Share to TwitterShare to FacebookShare to Pinterest
Labels: Pope