Spiritual Life is a Journey 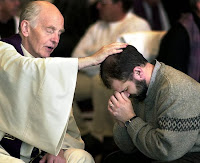 "Denigrating the 'before' is common in the spiritual life.  After a conversion experience, one is tempted to set aside, downplay, or reject one's past.  In Thomas Merton's biography The Seven Storey Mountain, the former dissolute student turned Trappist monk largely characterizes his former life as bad, and his life in the monastery as good.  Of the 'old' Thomas Merton, he said ruefully, 'I can't get rid of him.'

"In time, Merton would realize how misguided a quest that is: there is no post-conversion person and pre-conversion person.  There is one person in a variety of times, the past informing and forming the present.  God is at work at all times."

Email ThisBlogThis!Share to TwitterShare to FacebookShare to Pinterest
Labels: Prayer 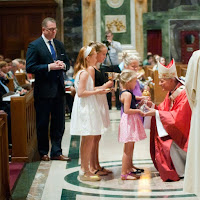 At our church, when the offertory gifts are brought up, the deacon receives them at the foot of the steps to the altar.   Usually, he raises both hands similar to an orans posture, but with his palms facing the family, and invokes God's blessing upon the family who brought up the gifts.  He then accepts the gifts and passes them on to an altar server.

When our (rather short in stature) deacon raised his hands to bless the family, the little girl at the front of the group -- she couldn't have been more than six years old -- broke into a grin, jumped up in the air, and enthusiastically slapped the deacon a high five.

God bless the deacon, he just smiled and kept praying.

I'd never seen that.  A child who was SO utterly excited to be participating in Mass that she simply burst with joy and high five'd the minister of God at the altar.

Thankfully, my first and most humbling thought was, "Wow.  Shouldn't we all be THAT thrilled to be here!?"

I take the faith formation of my children very, very seriously.  So, it sometimes is equally distressing to me to see an ostensibly Catholic child be oblivious of how to participate correctly in his or her faith, especially the Mass.

Shouldn't we all be THAT excited to be there!? 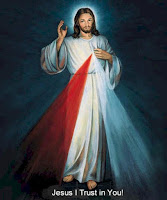 Intention: Today bring to Me SOULS WHO HAVE BECOME LUKEWARM, and immerse them in the abyss of My mercy. These souls wound My Heart most painfully. My soul suffered the most dreadful loathing in the Garden of Olives because of lukewarm souls. They were the reason I cried out: ‘Father, take this cup away from Me, if it be Your will.’ For them, the last hope of salvation is to run to My mercy.

Eternal Father, turn Your merciful gaze upon lukewarm souls who are nonetheless enfolded in the Most Compassionate Heart of Jesus. Father of Mercy, I beg You by the bitter Passion of Your Son and by His three-hour agony on the Cross: Let them, too, glorify the abyss of Your mercy.  Amen.

Intention: Today bring to Me THE SOULS WHO ARE DETAINED IN PURGATORY, and immerse them in the abyss of My mercy. Let the torrents of My Blood cool down their scorching flames. All these souls are greatly loved by Me. They are making retribution to My justice. It is in your power to bring them relief. Draw all the indulgences from the treasury of My Church and offer them on their behalf. Oh, if you only knew the torments they suffer, you would continually offer for them the alms of the spirit and pay off their debt to My justice.

Novena Prayers: Most Merciful Jesus, You Yourself have said that You desire mercy; so I bring into the abode of Your Most Compassionate Heart the souls in Purgatory, souls who are very dear to You, and yet, who must make retribution to Your justice. May the streams of Blood and Water which gushed forth from Your Heart put out the flames of Purgatory, that there, too, the power of Your mercy may be celebrated.

Eternal Father, turn Your merciful gaze upon the souls suffering in Purgatory, who are enfolded in the Most Compassionate Heart of Jesus. I beg You, by the sorrowful Passion of Jesus Your Son, and by all the bitterness with which His most sacred Soul was flooded: Manifest Your mercy to the souls who are under Your just scrutiny. Look upon them in no other way but only through the Wounds of Jesus, Your dearly beloved Son; for we firmly believe that there is no limit to Your goodness and compassion.  Amen.