To say that St. Patrick's Day is a high feast day in Savannah would be the understatement of the century!  It becomes The Emerald City, literally dying its multitude of fountains green and swathing every front porch in the Irish flag.

Do you know what the colors of the Irish flag represent?  The green represents the Catholics, the orange the Protestants, and the white the hoped-for peace between them.

Today, however, good St. Joseph is not to be ignored.  For all you Italians out there -- or just you humble daughters of the foster father of our Lord -- here are some crafty ideas for celebrating this important feast day from Catholic Icing.

Additionally, here is a really lovely, simple, paper "St. Joseph's Altar", courtesy of Evann Duplantier, for your family to construct.  Evann also has a lovely page full of menu choices, where you may enjoy everything from inspirational photos of other St. Joseph's Day altars to a super easy (and yummy!) edible craft.

Our parish deacon reminded us one Christmas that, although St. Joseph figures prominently in Jesus's early life in the Bible, St. Joseph never says a word.  Not one syllable.  How many of us could be counted upon to hear the Lord, follow His instructions, trust in His ways, and serve Him as He wishes, without ever saying a word?

"St. Pope John XXIII, who succeeded Pius XII in 1958, added some new feasts and made some other changes to the liturgical calendar, as well as amending some of the rubrics. In his 1962 edition of the Missal, he also deleted the word 'perfidis' (Latin: 'faithless') from the Good Friday prayer for the Jews, and added the name of St. Joseph to the Canon of the Mass. The second change was particularly significant, as many had considered the text of the Canon to be practically untouchable." (underlined emphasis added) 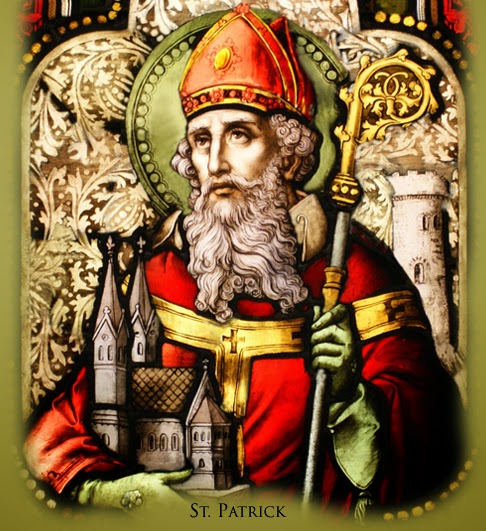 Here's a marvelous link to everything you ever wanted to know about St. Patrick!  And who wouldn't?  After all, he was Scottish, you know (!).  Enjoy! 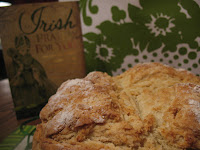 Tomorrow marks the feast of this great Irish saint and to celebrate here's my favorite recipe for good ole fashioned "Irish Soda Bread" (of which there would be no "soda" without the visit to Ireland of two Americans, Mr. Arm and Mr. Hammer!).  It's my favorite because it's won out over many other failures through the years!

I cut this recipe out of a magazine years ago, but unfortunately did not cut out the magazine's name.  So, if anyone recognizes this exact recipe, please let me know so I may ascribe proper credit.  Enjoy! 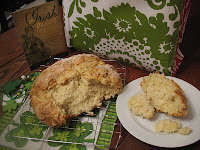 This recipe yields a lightly buttery, moist bread with a rough, crunchy, crusty outside.  MMMmmmm!

Here's an easy little craft to get you and your children in the right frame of mind for St. Patrick's Day!  The traditional image of a rainbow leading to a pot o' gold can be endowed with Christian meaning, a la St. Patrick's use of Ireland's native three-leafed shamrock to explain to the pagans there the Christian concept of three Divine Persons in the one God of the Most Holy Trinity.

Make a simple, rainbow-hued, paper chain and a black pot with gold coins from construction paper or sturdy card stock.  Remember, however, what the Bible tells us about treasure:

"Do not store up store up for yourselves treasures on Earth...but, store up treasures in Heaven...for where your treasure is, there will your heart also be!" (Matthew 6:19-21)

Therefore, on each link of the paper chain, write one of your spiritual "treasures" in life.  For this example, I chose these:

For another example, one of my children made one for an aunt and put each of our family member's names on a link.  The possibilities are endless and as unique to each of your children!

Now, go have fun with scissors!

And remember why anyone is a saint or striving to be a saint -- because God made us ALL to know, love, and serve Him in this world and to be happy with Him forever in Heaven.  And THAT's where we should store up our treasures!

Just in time for inspiration during the Fridays of Lent, here is a lovely FREE coloring book, which you may download for your children.  It is based upon the Stations of the Cross: