On Scalia and Family

I couldn't have said it any better.  Enjoy this (brief) lovely article regarding U.S. Supreme Court Justice Antonin Scalia on the noble vocation, generous virtue, important accomplishment, and need for a great sense of humor there is in raising a family:

The Eucharist and the Mass are the source and summit of our Catholic Christian faith.  Unwavering belief in the authenticity of the Eucharist as the actual Body and Blood of Christ (not a mere symbol) was absolute from the very origin of Christianity.

This IS my body.

Do this in memory of me.

So.  It's Lent.  And here's a nice Lenten habit for you: try to get to Mass at least one other time during the week besides Sunday.  Really.  You can do it!  Even if you can't do it every week, continue to try.

Do this in memory of Me.

Was ever another command so obeyed?

For century after century, spreading slowly to every continent and country and among every race on earth, this action has been done, in every conceivable human circumstance, for every conceivable human need from infancy and before it to extreme old age and after it, from the pinnacles of earthly greatness to the refuge of fugitives in the caves and dens of the earth.  Men have found no better thing than this to do

for kings at their crowning and for criminals going to the scaffold;

for armies in triumph or for a bride and bridegroom in a little country church;

for the proclamation of a dogma or for a good crop of wheat;

for the wisdom of the Parliament of a mighty nation or for a sick old woman afraid to die;

for a schoolboy sitting an examination or for Columbus setting out to discover America;

for the famine of whole provinces or for the soul of a dead lover;

in thankfulness because my father did not die of pneumonia;

for a village headman much tempted to return to fetich because the yams had failed;

because the Turk was at the gates of Vienna;

for the repentance of Margaret;

for the settlement of a strike;

for a son for a barren woman;

for Captain so-and-so, wounded and prisoner of war;

while the lions roared in the nearby amphitheater; on the beach at Dunkirk;

while the hiss of scythes in the thick June grass came faintly through the windows of the church;

tremulously, by an old monk on the fiftieth anniversary of his vows;

furtively, by an exiled bishop who had hewn timber all day in a prison camp near Murmansk;

gorgeously, for the canonisation of St. Joan of Arc --–

One could fill many pages with the reasons why men have done this, and not tell a hundredth part of them.  And best of all, week by week and month by month, on a hundred thousand successive Sundays, faithfully, unfailingly, across all the parishes of Christendom, the pastors have done this just to make the plebs sancta Dei – the holy common people of God.

To those who know a little of Christian history, probably the most moving of all the reflections it brings is not the thought of the great events and the well-remembered saints, but of those innumerable millions of entirely obscure faithful men and women, every one with his or her own individual hopes and fears and joys and sorrows and loves – and sins and temptations and prayers – once every whit as vivid and alive as mine are now.  They have left no slightest trace in this world, not even a name, but have passed to God utterly forgotten by men.

Yet each of them once believed and prayed as I believe and pray, and found it hard and grew slack and sinned and repented and fell again.  Each of them worshipped at the Eucharist, and found their thoughts wandering and tried again, and felt heavy and unresponsive and yet knew – just as really and pathetically as I do, these things.

[End of Dom Gregory's passage.  We now return you back to my comparatively exceedingly lame blog post.]

Try to get to Mass.  Go on Sunday, of course.  But, TRY to get to Mass just one other time during the week this Lent.  Or perhaps Eucharistic Adoration.  Even if you just pop in for 10 mintues!  He's there.

Don't you remember Who made you?
God made you.

Why did God make you?
God made you to know, love, and serve Him in this world and to be happy with Him forever in Heaven.

How can you possibly get to know Him, soften your heart to love Him, and learn how you are to serve Him if you don't even VISIT Him?  Jesus is waiting patiently for YOU in all the tabernacles of the world.  Through the miracle of the Eucharist, the person really truly present -- Body, Blood, Soul, and Divinity -- is Jesus Christ Himself.

Go see Him.  Glimpse Heaven on Earth.  Get to church.  Go!  Run!  Your creator awaits you, filled with love.  For you!

May your Lenten practices and sacrifices bring you abundant blessings!

The book already has been endorsed by numerous reputable Catholic authors, speakers, and EWTN hosts.  It's a small, portable gem, full of quick-read anecdotes followed by brief, two-sentence prayers written to raise both your heart and your mind to the Lord and His intentions for every aspect of your life.

The book's small size (only 6 1/2" square and 201 pages) makes it ideal for popping it into your purse (thus the "...Carry a Great Bag").  Its humorous and uber-quick devotions make it a lovely companion at all times, much more edifying and eminently more refreshing than that screen-based game you're tempted to turn to on your phone when you have just a moment or two to kill.

Instead this Lent, reach into your purse and open up a spiritual little ray of sunshine, illuminating your heart and your mind with God's love for you.  Teresa Tomeo's book will be the easiest thing you do for 40 days!

On February 13th, Associate Justice of the Supreme Court Antonin Scalia passed away unexpectedly of natural causes in his sleep while on a hunting trip in Texas.  A lifelong devout Catholic, Scalia was happily married and the father of nine children and fifty grandchildren.  His son, a priest, Father Paul Scalia, will celebrate his funeral at the Basilica of the National Shrine of Our Lady of the Immaculate Conception in Washington, D.C. on Saturday, February 20th.  The Mass of Christian Burial will be carried live on EWTN.

In a speech before the Knights of Columbus, Baton Rouge Council 969 on January 29, 2005, Supreme Court Justice Antonin Scalia, a lifelong, devout, Italian, Catholic, said the following on religious faith in public life:

And (for any of you young people still discerning your vocation in life), on why he became a lawyer, he also said this on April 9, 2008 in his remarks to Virginia high school students:

"I had an Uncle Vince -- most Italians have an Uncle Vince -- who was a lawyer. And he seemed to have a good life so I thought I'd give it a shot. And it turns out it was what I loved. Don't do it if you don't love it, it's not the most exciting profession unless you love the process, you love words."

"May the angels lead you into paradise; may the martyrs receive you at your arrival and lead you to the holy city Jerusalem. May choirs of angels receive you and with Lazarus, once poor, may you have eternal rest."

Here's a nice little FREE offer for you (and something to do with all those wonderful memories you took snapshots of over the Christmas holidays!).  Shutterfly is offering both you and me a free photo book!

Here is the link for this offer:

Assembling your photo book from your digital photos is as easy as 1-2-3, with Shutterfly's photograph upload and their drag-'n-drop, on-line, photo book design program.  A simple photo book makes a wonderful gift or a keepsake.  We make one each year and our children regularly flip through them, enjoying and sharing happy memories ("Awww!  Look how tiny So-and-So was back then!").

FREE Bible Study on the BVM 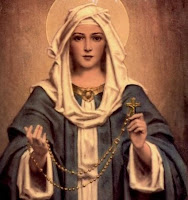 I received this offer from Scott Hahn's St. Paul Center for Biblical Theology.  It's a FREE offer for twelve, weekly, scripture-based, video lessons about the Blessed Virgin Mary, beginning on Ash Wednesday (next week...already!?).  I think there is a "complete" study that will be available later for purchase, but this is for twelve free video lessons from that full study.

I have not seen the videos yet, but even if they're just an "introductory peek," I thought this might be a nice perk for anyone looking to draw closer to Our Lady during Lent, as well as some stirring, scripture-based, Catholic, food-for-the-soul for the penitential season.

"Grow With Mary" - The Bible and The Virgin Mary

Enjoy!  May your Lent be blessed with His peace!