Just Get a Brick

Here in Savannah, it's just referred to as, "The Book."  John Berendt's well-written, reality-based novel, Midnight in the Garden of Good and Evil, is set in Savannah in 1981 and based on an actual murder.  The Book, arguably, put gracious, picturesque, historic Savannah back on the map as a popular tourist destination.

(And it certainly made the sale of stone girl lawn ornaments sky-rocket!)

The dust jacket describes the book as, "a hugely entertaining and deliciously perverse travelogue...as bracing and intoxicating as half a dozen mint juleps!"

To me, its romantic setting -- the picturesque, moss-draped oaks and cool, verdant, green squares of downtown Savannah -- is punctuated by John Berendt's pithy, observant narrative of the people involved in some of the seedier aspects of the city's life, the grit beneath the apparently genteel and generous skirts of upper crust, gracious, Southern Belle Savannah.

Beyond the sordid tale, however, I came away with one very important lesson:

How To Clean a Toilet.

In the book, the main character recounts the entire story in first person, told from the perspective of his being a newly arrived resident of Savannah.  As he attempts to clean up his crumbling apartment, the toilet, apparently, is beyond hope, its bowl encrusted irreparably with the local famously stubborn hard water deposits.

"What you need is a brick!" a local Savannahian tells him.

A brick.  He should scrub the toilet bowl with a brick.  Yes, an actual, run-'o-the-mill, ordinary, red, building brick (although in Savannah, the bricks are a tan color called "Savannah Gray").  A brick, it is explained, is harder than the hard water deposits, yet softer than the porcelain.

Last week, I decided I was willing to sacrifice the possible permanent marring of one of our lesser-used toilets to experiment on the veracity of this advice (imagine the possibilities if it actually worked!).  I used a plain ole red brick (we had exactly one, discarded in the back yard; I smashed it to get a smaller piece) to scrub the inner bowl of the toilet, which previously had been utterly uncleanable (...is that a word?).

And it worked!!!  It actually worked!

Here are my before, during, and after pictures to prove it to you.  Feel free to borrow this tactic and run with it.  ...just make sure you don't flush your bit of brick down the toilet.  THAT would be a whole 'nother kettle 'o fish...

Email ThisBlogThis!Share to TwitterShare to FacebookShare to Pinterest
Labels: Home 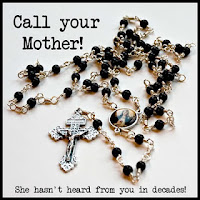 Here's a wonderful new devotion that I just heard my husband pray on Saturday:

Such a simple qualifier.  Such a tremendous difference.

I am saying this from now on!  Perhaps you can, too.

Lord, make us instruments of Your peace...  Happy praying!

Email ThisBlogThis!Share to TwitterShare to FacebookShare to Pinterest
Labels: Rosary 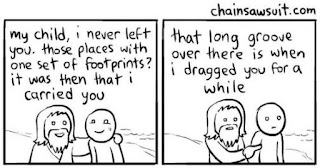 As a follow up to my last post, here's a bit of humor, too, from Jesus' perspective! 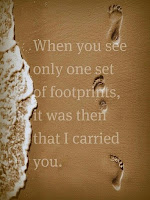 When you are facing tough times physically, whether through age or illness, St. Theresa of Avila might be a good saint for you to appeal to for assistance, as she suffered ailments immensely and famously said, "Lord, if this is how You treat Your friends, no wonder you have so few!"  Also, St. Dymphna is the patron saint of nervous conditions, St. Lucy the patron saint of eye ailments, and St. Agatha the patron saint of breast cancer fighters.

The evil one is know to torment even more those who are getting CLOSER to God, so if you are facing dark times during which your struggle seems only to be getting worse -- be confident, be strong, be courageous, and know that Our Lord and His saints ultimately will not let you down!
Always call upon your family and friends here, too -- whether related by blood, faux family, or parishioners at your church -- for their help here in your physical and spiritual warfare!  You might feel overwhelmed and that you just can't do this, but with God nothing is impossible (Luke 1:37).

Appeal to Him constantly and re-read the poem below, "Footprints in the Sand," for it is in your darkest times that He will carry you. 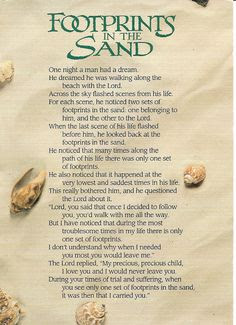